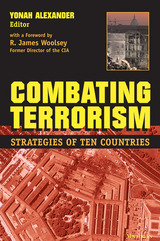 Combating Terrorism: Strategies of Ten Countries
edited by Yonah Alexander
University of Michigan Press, 2002
Cloth: 978-0-472-09824-8
The tragic events of September 11, 2001, and the consequent "war on terrorism" have made the question of effective counterterrorism policy a growing public concern. The original essays in Combating Terrorism offer a unique overview and evaluation of the counterterrorism policies of ten countries: the United States, Argentina, Peru, Colombia, the United Kingdom, Spain, Israel, Turkey, India, and Japan. Postscripts for each of the country chapters provide post-September 11 assessments of current counterterrorism practices. Most of the contributors to this volume have served in official governmental capacities and many continue to serve as consultants to governmental policy and decision makers.
All of the essays address the same set of questions to allow for cross-national comparison of strategies and an assessment of counterterrorism practices:
The conclusion to the volume summarizes the lessons that may be learned from the experiences of the ten countries and discusses a list of best practices in counterterrorism.
This book will be of interest to policymakers, scholars, and other individuals with professional responsibilities in the area of terrorism and security studies. Written in clear, accessible prose, this book will also appeal to the general reader who is interested in gaining insight into the array of issues facing governments that endeavor to combat terrorism, and into the possible solutions to one of the foremost threats to world peace in our time.
Yonah Alexander is Professor and Director, Inter-University Center for Terrorism Studies; Senior Fellow and Director, International Center for Terrorism Studies, Potomac Institute for Policy Studies; and Co-Director, Inter-University Center for Legal Studies, International Law Institute.
REQUEST ACCESSIBLE FILE