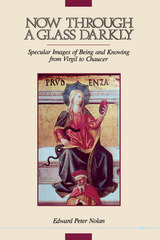 Now through a Glass Darkly: Specular Images of Being and Knowing from Virgil to Chaucer
by Edward Peter Nolan
University of Michigan Press, 1991
Cloth: 978-0-472-10170-2
In this series of interrelated essays, treating Ovil, Virgil, St. Augustine, Henrich von Morungen, Chretien de Troyes, Dante, Langland, and Chaucer, the author explores the ways in which medieval authors and their Roman predecessors used the image of the mirror both as instrument and metaphor. The essays individually provide fresh insights into the texts and issues discussed and, taken together, provide new perspectives on medieval culture and the ways it anticipated problems that plague our own.

Now through a Glass Darkly brings both traditional medievalist and postmodernist approaches to bear in its attempt to understand both the powers and the limits of verbal art. Nolan explores the ways medieval writers and their Roman predecessors used formal and thematic mirrors to examine the implications of alterity in the face of similarity, arguing that these preoccupations were as central to the medieval sensibility as they are to our own. Now through a Glass Darkly frames several of the key issues in the current debate over the continued viability (or not) of the inherited canon of Western culture, such as the question whether there is any meaning at all to be rescued from such notions as “coherence” or “tradition” in Western literature.

Now through a Glass Darkly will appeal to the educated generalist interested in the relationships between literature and its surrounding intellectual and cultural contexts as well as to those more specifically interested in medieval poetry and poetics. For medievalists and those who work at the intersection of critical theory and medieval literature, Now through a Glass Darkly will be of critical importance.
REQUEST ACCESSIBLE FILE