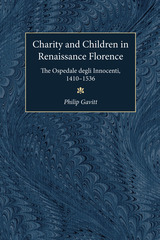 Alongside the architectural splendor and intellectual brilliance of early Renaissance Florence there existed a second world of poverty, misery, social despair, and child abandonment. The Ospedale degli Innocenti (Hospital of the Innocents), designed and built between 1419 and 1445 by the renowned architect Filippo Brunelleschi, united these disparate worlds. Christian charity and compassion, as well as the humanist commitment to social perfection, family values, and love for children, were intertwined with a civic pride in which charity curried God's favor and invoked God's blessings on the city's fortunes.

Based on a close and attentive reading of archival material from the hospital and from the Florentine State Archives, Charity and Children in Renaissance Florence both chronicles the concerns and ambivalence of parents who abandoned children and follows the lives of the hospital's inhabitants from childhood to death. The book also demonstrates how hospital officials deliberately duplicated the structure and values of the Florentine family within the hospital walls. Gavitt's research shows that early modern foundling hospitals were not charnel houses where parents knowingly and impersonally abandoned their unwanted children to certain death. Charity and Children in Renaissance Florence provokes reflection on the contrast between our own views on the care of homeless children and those of the Italian Renaissance.

Winner of the Society for Italian Historical Studies 1988 Award for Best Unpublished Manuscript.

REVIEWS
". . . [Gavitt's] study is without doubt an important contribution to our knowledge of the Italian Renaissance, in particular the way in which communities such as Florence were successful in bringing disadvantaged groups, such as abandoned children, back from the margins to the mainstream of society."
—Fifteenth-Century Studies
— Fifteenth-Century Studies

". . . Gavitt's book presents a sustained attempt to rebut the depiction of Florentine children as victims of brutality and the Innocenti as a charnel house where parents knowingly abandoned their unwanted children to certain death. . . . [A] gracefully written an informative book that avoids a naive and sentimental treatment of its subject."
—Julius Kirshner, Italica
— Julius Kirshner, Italica

"This study is especially welcome because it shifts the discussion of charitable institutions away from narrow questions of poverty and its alleviation (questions that are difficult to answer given our knowledge of population and the cost of living) toward questions about the broader cultural significance of charity and charity's recipients."
—Journal of Modern History
— Journal of Modern History

"[an] important study of Florence's great foundling hospital, the Ospedale degli Innocenti, during its first century of existence . . . . [Gavitt] makes his readers think carefully about the broader cultural (and political) significance of kinship and household in ways which more narrowly defined family history have not."
—Journal of Modern History
— Journal of Modern History