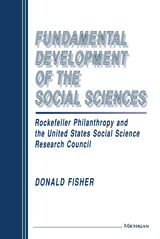 The United States Social Science Research Council (SSRC), founded in 1923, was the first national social science institution in the world and might be said to represent the creation of a "science of society." In Fundamental Development of the Social Sciences , Donald Fisher shows how this institution, under the considerable influence of Rockefeller philanthropy, shaped an entire discipline.

Fisher demonstrates that the creation and growth of the SSRC during the 1920s and 1930s is essential to our understanding of the major developments in the social sciences since World War II. He shows that during this period, the place of social science and social scientists in American society was fixed in a way that has had substantial, lasting impact.

The author weaves a number of larger, related issues into his account of the wide-ranging influence of the SSRC: the role of social scientists in the political life of the societies in which they live; the way in which knowledge systems develop and change; the role of philanthropy in industrialized societies; and the formation and preservation of the modern capitalist state.

Donald Fisher's discussion of how an American institution sculpted an entire discipline will be of interest to all social scientists and historians of social science.

"Fisher's book is notable for the care that it displays in presenting evidence and for its sophistication in connecting individuals, institutions, and social structures. It breaks new ground in this important field and will be a standard for years to come."
—Choice
— Choice