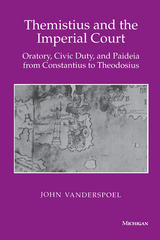 Themistius and the Imperial Court: Oratory, Civic Duty, and Paideia from Constantius to Theodosius
by John Vanderspoel
University of Michigan Press, 1995
Cloth: 978-0-472-10485-7
For generations the debate has continued: can politicians, or mid-level administrators, speak freely and say what they think, or must they describe their superiors in purely flattering ways and abandon any philosophy of independent thought? The politician and philosopher Themistius faced these same issues in the later fourth century, in composing and delivering his panegyrics for several Roman emperors.
John Vanderspoel examines the relationship between Themistius and the emperors whom he served, and assesses realistically how philosopher and emperor interacted. Themistius' speeches cover a range of periods and topics, and offer an important body of evidence for governmental affairs in the later fourth century.
Themistius and the Imperial Court includes chapters on Themistius himself, as well as on his relations with the emperors Constantius, Julian, Jovian, Valens, and Theodosius. Appendices discuss Themistius' philosophical works and extant speeches, present translations of selected sections of his Orations, and offer a chronology of Themistius' speeches, among other topics.
Themistius and the Imperial Court will be of interest to ancient historians, classicists, students and scholars of the ancient Near East, and all those interested in power politics within governing classes.
John Vanderspoel is Associate Professor of Ancient History, University of Calgary. He has written numerous articles and reviews on late antiquity.
REQUEST ACCESSIBLE FILE