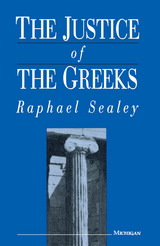 The Justice of the Greeks
by Bertram Raphael Izod Sealey
University of Michigan Press, 1994
Cloth: 978-0-472-10524-3
Among the most distinguished scholars of ancient Greek law writing today, Raphael Sealey in his newest book examines the Greek contribution to the concept of justice. The Justice of the Greeks considers a series of themes inherent in or characteristic of Greek law, and it illuminates the fundamental difference between Greek law and other legal systems both ancient and modern.
The introductory chapter surveys theories of law and maintains that every system of law is characterized by distinctive principles, concepts, and aims. The process of issuing laws in writing led the Greeks to regard laws as discrete things, whereas modern thought--drawing on the Roman practice of argument by analogy--assumes that law is a continuum. The Justice of the Greeks also considers ancient codes of written law, Greek distinctions of personal status, and the development of procedures for the peaceful settlement of disputes.
The Justice of the Greeks is directed toward people versed in the history and literature of Classical Greece. It aspires to bring the study of Greek law out of isolation, and to reveal its place in the main current of legal development. Scholars of comparative law, as well as classicists and legal historians, will find much of interest in this unusual book.
AUTHOR BIOGRAPHY

Raphael Sealey is the author of numerous books and articles on Greek history and law. He is Professor of History, University of California, Berkeley.

". . . Sealey's brilliant analysis demonstrates the Greek origins of what we can recognize as formalized legal procedure."
—Choice
— Choice

"Sealey presents the reader with an illuminating insight into Athenian law with this work, which demonstrates the breadth and depth of his research."
—Classical World
— Classical World