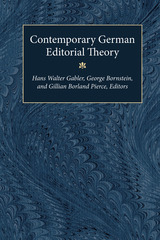 Contemporary German Editorial Theory
edited by Hans Walter Gabler, George Bornstein and Gillian Borland Pierce
University of Michigan Press, 1995
Cloth: 978-0-472-10570-0
Over the past decade, Anglo-American notions of textual construction and editorial theory have begun major paradigm shifts. Many of the key emergent issues of Anglo-American debate--such as theories of versions--are already familiar in German theory. In other respects, including systematic reflection on the design and function of editorial apparatus, the German debate has already produced paradigms and procedures as yet unformulated in English.
Contemporary German Editorial Theory makes available for the first time in English ten major essays by seven German theorists, together with an original introductory meditation by Hans Walter Gabler, editor of the celebrated edition of James Joyce's Ulysses. The volume thus participates in the paradigm shift in editorial theory that has led both to theoretical reconception of the field and to groundbreaking practical results. Topics discussed include the distinction between historical record and editor's interpretation, the display of multiple versions, concepts of authorization and intention, and the relations of textual theory to approaches like deconstruction and semiotics. The book also includes suggestions for further reading in both languages and a glossary of technical terms.
Contributors are Hans Zeller, Miroslav Cervenka, Elisabeth Höpker-Herberg, Henning Boetius, Siegfried Scheibe, and Gerhard Seidel.
Bringing together the heretofore separate Anglo- American and German approaches will strengthen each separately and prepare the way for a new hybrid combining the advantages of both orientations. This book will interest not only students of Anglo-American or German literature, but all who study cultural construction and transmission.
Hans Walter Gabler is Professor of English Literature, University of Munich. George Bornstein is Professor of English, University of Michigan. Gillian Borland Pierce is a Ph.D. candidate in Comparative Literature, University of Michigan.
REQUEST ACCESSIBLE FILE