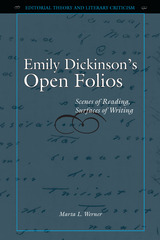 Emily Dickinson's Open Folios: Scenes of Reading, Surfaces of Writing
by Marta L. Werner
University of Michigan Press, 1996
Cloth: 978-0-472-10586-1
Emily Dickinson's Open Folios: Scenes of Reading, Surfaces of Writing is a fine facsimile edition and aesthetic exploration of a group of forty late drafts and fragments hitherto known as the "Lord letters." The drafts are presented in facsimile form on high-quality paper alongside typed transcriptions that reproduce as fully as possible the shock of script and startling array of visual details inscribed on the surfaces of the manuscripts.
Werner argues that a redefinition of the editorial enterprise is needed to approach the revelations of these writings-- the details that have been all but erased by editorial interventions and print conventions in the twentieth century. Paradoxically, "un-editing" them allows an exploration of the relationship between medium and messages. Werner's commentary forsakes the claims to comprehensiveness generally associated with scholarly narrative in favor of a series of speculative and fragmentary "close-ups"--a portrait in pieces. Finally, she proposes the acts of both reading and writing as visual poems.
A crucial reference for Dickinson scholars, this book is also of primary importance to textual scholars, editorial theorists, and students of gender and cultural studies interested in the production, dissemination, and interpretation of works by women writers.
This publication has been supported by a grant from the National Endowment for the Humanities.
Marta L. Werner received her Ph.D. from the State University of New York-Buffalo. She is an independent scholar and a member of the Emily Dickinson Editing Collective.
REQUEST ACCESSIBLE FILE