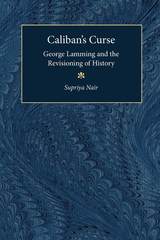 Caliban's Curse: George Lamming and the Revisioning of History
by Supriya Nair
University of Michigan Press, 1996
Cloth: 978-0-472-10717-9
Ever present in the work of contemporary Barbadian novelist George Lamming, author of In the Castle of My Skin, Natives of My Person, The Emigrants, and The Pleasures of Exile, are the subjects of history and revolution. In Caliban's Curse, Supriya M. Nair traces these themes and situates Lamming's work within the ongoing discourses of nationalism and identity. Retracing the history of colonial intervention in the anglophone Caribbean and seeking connections among Africa, the Caribbean, and England, Caliban's Curse moves beyond the popular perception of the archipelago as an ahistorical tourist paradise and presents the islands as a space populated by the tragic and triumphant cultures of the black diaspora.
Caliban's Curse draws upon a range of theories--postcolonial, Marxist, and feminist--to contextualize the black diaspora of the modern Caribbean through one of its primary anglophone novelists. Putting George Lamming in conversation with such contemporaries as C.L.R. James, Derek Walcott, and Wilson Harris, Nair argues that Lamming's works expand the protest of Shakespeare's Caliban to articulate a reinvention of Caribbean cultures. Both cursed by and cursing the weight of colonial history, Lamming works against the paralysis induced by such an encounter; his work serves to rewrite canonical icons and to reimagine popular cultures.
"Supriya Nair writes about the problems of history and social revolution with passion and clarity and an amazing range of critical and cultural reference. . . . She brings to existing studies of Lamming a wide and sustained knowledge of the forces that have shaped the West Indian novel, and the wider postcolonial debates in which these novels are read and discussed." --Simon Gikandi, University of Michigan
Supriya Nair is Associate Professor of English, Tulane University.
REQUEST ACCESSIBLE FILE