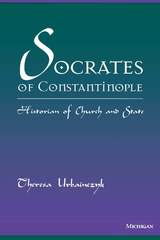 Socrates of Constantinople: Historian of Church and State
by Theresa Evelynne Urbainczyk
University of Michigan Press, 1997
Cloth: 978-0-472-10737-7
The fourth century c.e. saw the death of the ancient world and the birth of the medieval. Pagan temples crumbled through disuse, while Christian churches sprang up around the fledgling Holy Roman Empire. The emperor Constantine's conversion to Christianity changed history: pagans blamed the decline and fall of the Roman Empire on Christianity, but Christians explained events differently.
The church history written by Socrates of Constantinople is one of the most important sources, Eastern or Western, pagan or Christian, for these complex centuries. Socrates of Constantinople: Historian of Church and State is the first detailed study of Socrates' history--it describes the historical situation in which he wrote his work, and it pulls together all the personal information available about the author. The volume then examines Socrates' own work: how it was composed, which sources were used and how, and it looks at the relationship between Socrates' work and other church histories. It goes on to consider Socrates' attitudes towards bishops, emperors, and their enemies.
Socrates is sometimes dismissed by modern scholars for being a poor ecclesiastical historiographer. However, Theresa Urbainczyk carefully demonstrates Socrates' theory of causation, which affected the way he wrote his history, and she argues that he introduced secular material deliberately. In his view arguments and division in the church caused trouble in the state. In other words, when church leaders quibbled over theology, they endangered the state. It was therefore their duty, for the sake of church and state, to unite--under the emperor. This study not only calls on scholars to reexamine Socrates of Constantinople but makes the wider arguments that the ancients were far less concerned with genre than are modern scholars, and that ecclesiastical history is a continuation of, not a deviation from, political history.
Socrates of Constantinople: Historian of Church and State will be of interest to students and scholars interested in late Roman and early Christian history, theology, and historiography. Anyone studying late antiquity will find an examination of Socrates' attitudes essential.
Theresa Urbainczyk is College Lecturer in the Department of Classics, University College, Dublin.
REQUEST ACCESSIBLE FILE