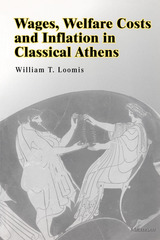 Wages, Welfare Costs and Inflation in Classical Athens
by William T. Loomis
University of Michigan Press, 1999
Cloth: 978-0-472-10803-9
William T. Loomis examines all surviving Athenian wages, salaries, welfare payments and other labor costs to determine what people really were paid for various kinds of work and allowances. These determinations, in turn, enable the author to cast a new and authoritative light on three controversial questions: Was there a "standard wage" in Athens? Were there periods of inflation and deflation? Did Athenians have an "embedded" or a "market" economy?
Individual chapters critically examine each surviving wage or other payment in thirteen job categories, including public office holders; soldiers and sailors; priests, oracles, and seers; overseers, architects, and other salaried construction personnel; and prostitutes and pimps. Three additional chapters then consider whether there was a "standard wage," inflation and deflation in Athens, and the implications of these conclusions for the hotly debated question about the nature of the Athenian economy.
This is the first comprehensive study of Athenian labor and welfare costs since August Böckh's Die Staatshaushaltung der Athener (1886). An updated critical study has been much needed, to take account of the greatly expanded evidence (Aristotle's Constitution of the Athenians, more than a dozen other papyrus texts and hundreds of inscriptions), and the uneven quality of the sources. This collection allows William T. Loomis to argue--contrary to prevailing scholarly opinion--that there never was a "standard wage" at Athens.
"This volume will be a significant contribution to all studies of ancient Greek civilization." --Alan L. Boegehold, Brown University
William Loomis is Visiting Professor of Classics, University of Michigan.
REQUEST ACCESSIBLE FILE