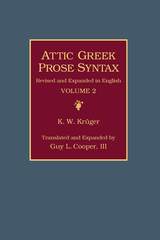 The language of classical Greek literature has been extensively studied since the Renaissance, and the most generally admired approach to Greek grammar and syntax has long been K. W. Krüger's Griechische Sprachlehre. In this translation Guy L. Cooper III accepts Krüger's simple and transparent organization, but greatly expands the substance of the earlier work by increasing the total number of citations from the original texts. Research since 1875, especially the contributions of Basil Lanneau Gildersleeve, is incorporated so as to create a reference work, in English, which covers the full range of this complex subject.

Krüger's original paragraph numbering has been maintained so that references in previously published works can be followed directly in the new work. However, every paragraph and chapter has been revised and expanded, opening up new subheadings within Krüger's format. The English has moved away from Krüger's laconic style to a more flowing, readable presentation, without jargon and unexplained technical language. A complete index of passages cited and the impressive number of citations make the work a running syntactic commentary on the whole range of Attic prose literature. The net result is a new comprehensive reference work, an essential reference for libraries and personal collections alike.

REVIEWS
"The quality of Krüger's work is unquestionable: it is, to my mind, the best and most detailed description of the syntax of Attic Greek prose in existence, and it will be of great service to English-speaking Greek scholars to have this work conveniently at their disposal in an English translation."
—Kweku A. Garbrah, University of Michigan
— Kweku A. Garbrah, University of Michigan