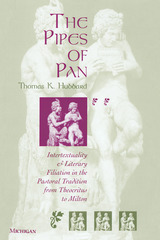 The Pipes of Pan: Intertextuality and Literary Filiation in the Pastoral Tradition from Theocritus to Milton
by Thomas K Hubbard
University of Michigan Press, 1998
Cloth: 978-0-472-10855-8
Departing from conventional views of the pastoral genre as an Arcadian escape from urban sophistication, The Pipes of Pan highlights its genesis in the allusive and polemical literary cultures of Alexandria and Rome. Both cities placed great emphasis upon learned invocation and reformulation of poetic models. The pastoral metaphor provided Theocritus and Vergil with tools for representing the contests and confrontations of poets and genres, the exchange of ideas among poets, and poets' reflections on the efficacy of their works.
Pastoral poetry highlights the didactic relationship of older and younger shepherds, whether as rivals or as patron and successor. As such it is an ideal form for young poets' self-representation vis-à-vis their elders, whose work they simultaneously appropriated and transformed, even as the elder poets were represented in the new texts. This influence is reenacted in every generation: Theocritus vs. his Alexandrian forebears, Vergil vs. Theocritus, Calpurnius vs. Vergil, Nemesianus vs. Vergil and Calpurnius, Petrarch vs. Vergil, Boccaccio vs. Petrarch, Spenser vs. Vergil, along with Chaucer and Milton vs. Spenser.
The Pipes of Pan combines multiple strands of contemporary intertextual theory with reception aesthetics and Harold Bloom's theory of intersubjective conflict between generations of poets. It also provides one of the first systematic studies of intertextual and intersubjective dynamics within a whole genre.
This work will be of interest to classicists, students of literary theory, comparative literature, medieval and Renaissance literature, Italian humanism, and English literature of the sixteenth and seventeenth centuries. All texts are translated.
Thomas Hubbard is Associate Professor of Classics, University of Texas at Austin.
REQUEST ACCESSIBLE FILE