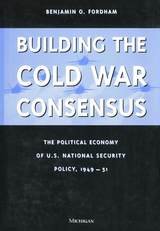 In 1950, the U.S. military budget more than tripled while plans for a national health care system and other new social welfare programs disappeared from the agenda. At the same time, the official campaign against the influence of radicals in American life reached new heights. Benjamin Fordham suggests that these domestic and foreign policy outcomes are closely related. The Truman administration's efforts to fund its ambitious and expensive foreign policy required it to sacrifice much of its domestic agenda and acquiesce to conservative demands for a campaign against radicals in the labor movement and elsewhere.
Using a statistical analysis of the economic sources of support and opposition to the Truman Administration's foreign policy, and a historical account of the crucial period between the summer of 1949 and the winter of 1951, Fordham integrates the political struggle over NSC 68, the decision to intervene in the Korean War, and congressional debates over the Fair Deal, McCarthyism and military spending. The Truman Administration's policy was politically successful not only because it appealed to internationally oriented sectors of the U.S. economy, but also because it was linked to domestic policies favored by domestically oriented, labor-sensitive sectors that would otherwise have opposed it.
This interpretation of Cold War foreign policy will interest political scientists and historians concerned with the origins of the Cold War, American social welfare policy, McCarthyism, and the Korean War, and the theoretical argument it advances will be of interest broadly to scholars of U.S. foreign policy, American politics, and international relations theory.
Benjamin O. Fordham is Assistant Professor of Political Science, State University of New York at Albany.
TABLE OF CONTENTS
Contents
Acknowledgments
List of Abbreviations
1. The Domestic Political Economy and U.S. National Security Policy
2. The Politics of Rearmament in the Executive Branch I: The Fiscal 1951 Budget
3. The Politics of Rearmament in the Executive Branch II: NSC 68 and Rearmament
4. The Political and Economic Sources of Divergent Foreign Policy Preferences in the Senate, 1949−51
5. The Conflictual Politics of Consensus Building I: Korea, Rearmament, and the End of the Fair Deal
6. The Conflictual Politics of Consensus Building II: The Development of the Internal Security Program
7. The Conflictual Politics of Consensus Building III: Rearmament and the Red Scare
8. Conclusion: Domestic Politics and Theories of National Security Policy
Appendix: Data Collection
Notes
References
Name Index
Subject Index
REQUEST ACCESSIBLE FILE