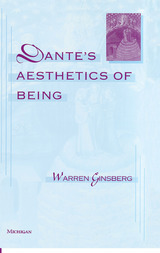 Dante's Aesthetics of Being
by Warren Stuart Ginsberg
University of Michigan Press, 1998
Cloth: 978-0-472-10971-5
"I am one who, when love inspires me, takes note . . ." --Dante
Despite the absence of tracts about beauty and art, aesthetic issues did command the attention of people in the Middle Ages. Whenever poets or philosophers turned their thoughts to the order of the heavens, whenever they delighted in music or art, they contemplated how the pleasure they took in the artistry of the universe was related to the God who created it. For Dante, aesthetics was the discourse of being and could not be narrowly defined. The aesthetic became the domain in which he considered not only form and proportion, but questions of love, identity, and perfection of the self.
Warren Ginsberg expertly guides us through Dante's work. He distinguishes between early texts such as the Vita Nuova, in which the aesthetic offers only a form of knowledge between sensation and reason, and the Comedy, in which the aesthetic is transformed into a language of existence. Among other subjects, Dante's Aesthetics of Being treats poeticism, literary history, language theory, the relation of philosophy to poetry, and of course, aesthetics. Its readers will include not only experts in Dante and medievalists in general, but literary critics of all periods. Indeed, anyone interested in poetic theory, the philosophy of beauty, or interdisciplinary studies will profit from reading Ginsberg's thoughtful offering.
Warren Ginsberg is Professor of English, University at Albany, State University of New York. He is author of The Cast of Character: The Representation of Personality in Ancient and Medieval Literature and editor of two Middle English poems, Wynnere and Wastoure and The Parlement of the Thre Ages.
REVIEWS
"Ginsberg's book offers a foundation that Renaissance scholars might productively build upon to understand early modern aesthetics."
--William J. Kennedy, Cornell University, Renaissance Quarterly
— William J. Kennedy, Cornell University, Renaissance Quarterly