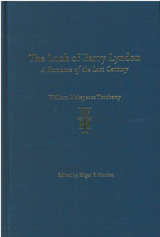 The Luck of Barry Lyndon: A Romance of the Last Century. By Fitz-Boodle.
by William Makepeace Thackeray
edited by Edgar F. Harden
University of Michigan Press, 1999
Cloth: 978-0-472-11042-1

The Thackeray Edition proudly announces two additions to its collection: Catherine and The Luck of Barry Lyndon. The Thackeray Edition is the first full-scale scholarly edition of William Makepeace Thackeray's works to appear in over seventy years, and the only one ever to be based on an examination of manuscripts and relevant printed texts. It is also a concrete attempt to put into practice a theory of scholarly editing that gives new insight into Thackeray's own compositional process.

The Luck of Barry Lyndon, serialized in Fraser's Magazine in 1844, is a wonderfully hard-edged advance upon Thackeray's previous writing: a tour de force dramatization at novelistic length of the moral vacuity of its first person narrator. The inner workings of this narrator are far more complicated than in earlier Thackeray writings, and are presented in a far more subtle, yet not humorless, manner. The mock-Bildungsroman aspect of the novel is brought about by the non-enlightenment of the title-figure, his failure to find a meaningful love-relationship, and his inability to discover a calling that identifies both a significant direction for his individual existence and, at the same time, an appropriate accommodation to his duties to society. Achieved in brilliant, accomplished style, Barry Lyndon is a significant and progressive experiment in narration for Thackeray.

Sheldon F. Goldfarb is an independent scholar who received his Ph.D. from the University of British Columbia.