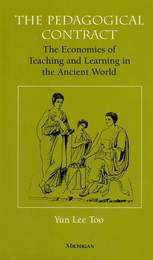 The Pedagogical Contract explores the relationship between teacher and student and argues for ways of reconceiving pedagogy. It discloses this relationship as one that since antiquity has been regarded as a scene of give-and-take, where the teacher exchanges knowledge for some sort of payment by the student and where pedagogy always runs the risk of becoming a broken contract. The book seeks to liberate teaching and learning from this historical scene and the anxieties that it engenders, arguing that there are alternative ways of conceiving the economy underlying pedagogical activities.
Reading ancient material together with contemporary representations of teaching and learning, Yun Lee Too shows that apart from being conceived as a scene of self-interest in which a professional teacher, or sophist, is the charlatan who cheats his pupil, pedagogy might also purport to be a disinterested process of socialization or a scene in which lack and neediness are redeemed through the realization that they are required precisely to stimulate the desire to learn. The author also argues that pedagogy ideally ignores the imperative of the conventional marketplace for relevance, utility, and productivity, inasmuch as teaching and learning most enrich a community when they disregard the immediate material concerns of the community.
The book will appeal to all those who understand scholarship as having an important social and/or political role to play; it will also be of interest to literary scholars, literary and cultural theorists, philosophers, historians, legal theorists, feminists, scholars of education, sociologists, and political theorists.
Yun Lee Too is Assistant Professor of Classics, Columbia University. She is the author of Rethinking Sexual Harassment;The Rhetoric of Identity in Socrates: Text, Power, Pedagogy; and The Idea of Ancient Literary Criticism, forthcoming; and coeditor, with Niall Livingstone, of Pedagogy and Power: Rhetorics of Classical Learning.
TABLE OF CONTENTS
Contents
Introduction: Socratizing Pedagogy
1. The Pedagogical Contract
2. The "Disinterest" of Social Contract
3. The Economy of Desire
4. Teaching Out of Context
5. The Ends of Pedagogy
Conclusion
Notes
Bibliography
Index
REQUEST ACCESSIBLE FILE