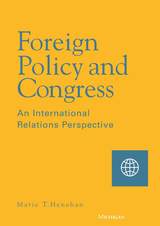 In the traditional view of foreign policy making in the United States, the President is considered the primary authority and Congress is seen as playing a subsidiary role. Marie T. Henehan looks at the effects of events in the international system on both the content of foreign policy and what actions Congress takes on foreign policy. Henehan argues that the only way to understand the way congressional behavior varies over time is by looking at the rise and resolution of critical issues in foreign policy, which in turn have their origin in the international system. When a critical foreign policy issue arises, congressional activity and attempts to influence foreign policy increase. Once the debate is resolved and one side wins, a consensus emerges and Congress settles into a more passive role. Using a data set consisting of all roll call votes on foreign policy issues taken by the Senate from 1897 to 1984 to generate indicators of Congressional behavior, together with the rise and fall of critical issues in international relations, Henehan is able to develop a more nuanced understanding of Congress's role in foreign policy making over time.
In recent years political scientists have begun to consider the impact of the international system on domestic policy. Part of the difficulty of some of this work, as well as work on Congress's role in foreign policy, is that it has been limited in terms of time and the number of events the analysis considered, depending on case studies. This book offers a systematic consideration of the effects of international events on domestic politics, crossing many different kinds of international activity, and provides a unique longitudinal view of Congressional action on foreign policy.
This book will be of interest to scholars of international relations, American foreign policy making, and Congress.
Marie T. Henehan is Assistant Professor of Political Science, Vanderbilt University.
TABLE OF CONTENTS
Contents
List of Figures
List of Tables
Preface
Introduction: Congress and Foreign Policy from an International Relations Perspective
1. The Study of Congressional Behavior over Time
2. Conceptualizing, Explaining, and Measuring Congressional Behavior
3. Long-Term Trends in Foreign Policy Activity in the Senate and the Impact of Critical Issues
4. Disagreement over Foreign Policy in the Senate
5. Variations in Behavior by Issue Area
6. Conclusion: Theories and Research on Congressional Behavior on Foreign Policy
Appendix: Collection and Coding of Data
Notes
References
Author Index
Subject Index
REQUEST ACCESSIBLE FILE