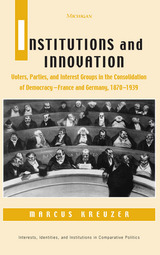 Institutions and Innovation: Voters, Parties, and Interest Groups in the Consolidation of Democracy - France and Germany, 1870-1939
by Marcus L. Kreuzer
University of Michigan Press, 2001
Cloth: 978-0-472-11186-2
If all parties need votes to get elected, why do some parties court voters more ardently than others? To answer this question, the book analyzes how political institutions determine the degree to which parties behave as entrepreneurial agents of voters or as inert, bureaucratic behemoths and how different levels of party responsiveness affect democratic consolidation.
Institutions and Innovations analyzes the troubled history of French and German parties between 1870 and 1939 to develop a general explanation of how the development of responsive parties constitutes a key element for the consolidation of democracies, past and present. It explains why French parties responded more swiftly than German ones to very similar changes in their economic and political environments. The book demonstrates that the national differences in party responsiveness played a key role in the collapse of the German Weimar Republic (1918ñ1933) and in the survival of the French Third Republic (1870ñ1939). It addresses the general fates of French and German democracy by asking three specific questions: Why did German socialists reject Keynesianism while their French counterparts swiftly embraced it? Why did German liberals, compared to French ones, fail to modernize their logistical infrastructure and electioneering methods? Why were German conservatives less effective than French ones in fending off the challenge posed by fascist and peasant insurgent movements that arose in the 1920s and 1930s?
In answering these questions, the book engages new institutional theories and longstanding party literature to demonstrate that the electoral conduct of parties is structured in equal parts by socioeconomic and institutional constraints. The book's interdisciplinary focus sheds a critical light on the exceptionalism of purely historical accounts and reductionist and universal claims of ahistorical political science theories.
Marcus Kreuzer is Assistant Professor of Political Science, Villanova University.
AUTHOR BIOGRAPHY