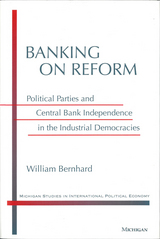 Banking on Reform examines the political determinants of recent reforms to monetary policy institutions in the industrial democracies. With these reforms, political parties have sought to draw on the political credibility of an independent central bank to cope with electoral consequences of economic internalization and deindustrialization.
New Zealand and Italy made the initial efforts to grant their central banks independence. More recently, France, Spain, Britain, and Sweden have reformed their central banks' independence. Additionally, members of the European Union have implemented a single currency, with an independent European central bank to administer monetary policy.
Banking on Reform stresses the politics surrounding the choice of these institutions, specifically the motivations of political parties. Where intraparty conflicts have threatened the party's ability to hold office, politicians have adopted an independent central bank. Where political parties have been secluded from the political consequences of economic change, reform has been thwarted or delayed. The drive toward a single currency also reflects these political concerns. By delegating monetary policy to the European level, politicians in the member states removed a potentially divisive issue from the domestic political agenda, allowing parties to rebuild their support constructed on the basis of other issues. William T. Bernhard provides a variety of evidence to support his argument, such as in-depth case accounts of recent central bank reforms in Italy and Britain, the role of the German Bundesbank in the policy process, and the adoption of the single currency in Europe. Additionally, he utilizes quantitative and statistical tests to enhance his argument.
This book will appeal to political scientists, economists, and other social scientists interested in the political and institutional consequences of economic globalization.
William T. Bernhard is Assistant Professor of Political Science, University of Illinois, Urbana-Champaign.
AUTHOR BIOGRAPHY

William Bernhard is Assistant Professor of Political Science at the University of Illinois.