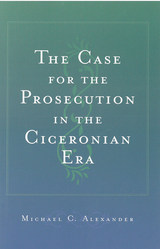 Much of the modern world's knowledge of criminal court trials in the Late Roman Republic derives from the orations of Cicero. His eleven court trial speeches have provided information about the trials and the practices of the time period. Records of the prosecution's case are lost; these speeches, our only transcripts of the time, were delivered by the defense. The Case for the Prosecution in the Ciceronian Era attempts to restore the judicial balance by depicting the lost side of the trial.
Guided by Cicero's argument, Michael C. Alexander recreates the prosecution's case against the defendants in the trials.
Organized into eleven chapters, each detailing one trial, the core of the work discusses the different dimensions of each trial, the circumstances surrounding the cases, those involved, the legal charges and allegations made by the prosecution, the ways in which the prosecution might have countered Cicero's rebuttal and the outcome. There is also a discussion concerning particular problems the prosecution may have faced in preparing for the trial. This book reveals strong points in favor of the prosecution; justifies the hope of the prosecutor, a private citizen who had volunteered to undertake the case; and asks why the prosecutors believed they would come out victorious, and why they eventually failed.
The Case for the Prosecution in the Ciceronian Era draws on ancient rhetorical theory and on Roman law to shed light on these events. It will interest historians and classicists interested in Ciceronian oratory and those intrigued by legal history.
Michael C. Alexander is Associate Professor of History, University of Illinois, Chicago.
TABLE OF CONTENTS