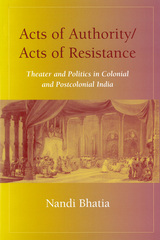 Despite its importance to literary and cultural texts of resistance, theater has been largely overlooked as a field of analysis in colonial and postcolonial studies. Acts of Authority/Acts of Resistance seeks to address that absence, as it uniquely views drama and performance as central to the practice of nationalism and anti-colonial resistance.

Nandi Bhatia argues that Indian theater was a significant force in the struggle against oppressive colonial and postcolonial structures, as it sought to undo various schemes of political and cultural power through its engagement with subjects derived from mythology, history, and available colonial models such as Shakespeare. Bhatia's attention to local histories within a postcolonial framework places performance in a global and transcultural context. Drawing connections between art and politics, between performance and everyday experience, Bhatia shows how performance often intervened in political debates and even changed the course of politics.

One of the first Western studies of Indian theater to link the aesthetics and the politics of that theater, Acts of Authority/Acts of Resistance combines in-depth archival research with close readings of dramatic texts performed at critical moments in history. Each chapter amplifies its themes against the backdrop of specific social conditions as it examines particular dramatic productions, from The Indigo Mirror to adaptations of Shakespeare plays by Indian theater companies, illustrating the role of theater in bringing nationalist, anticolonial, and gendered struggles into the public sphere.

Nandi Bhatia is Associate Professor of English at the University of Western Ontario.

REVIEWS
"A breakthrough book in the field of colonial and postcolonial studies. . . . In exploring the intricate ways in which theater and politics were intertwined in the everyday experiences of the colonizer and the colonized in India, Bhatia shows how drama and performance were the most important genres in the practice of nationalism."
--Simon Gikandi, University of Michigan