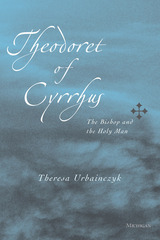 Theodoret of Cyrrhus: The Bishop and the Holy Man
by Theresa Evelynne Urbainczyk
University of Michigan Press, 2002
Cloth: 978-0-472-11266-1
The writing of a saint's life can be as political as it is pious. In this, her second book, Theresa Urbainczyk demonstrates how one collection of saints' lives--the Religious History of Theodoret, bishop of Cyrrhus--both prescribes and describes the relationship between ascetics and the early Church.
With the conversion of Constantine and his subsequent championing of the Christian cause, the Church rapidly began to increase its wealth and status. As coins filled the coffers of God, some Christians came to feel that their religion had become corrupted. They fled to the desert wastes, seeking a purer, holier life. These recluses and ascetics are the subjects of Theodoret's Religious History. The Syrian bishop had known many of them, some for all his life.
Urbainczyk argues that Theodoret's work was not merely written as an act of piety, but was in fact a very political treatise, addressing the theological disputes of his day. The main tensions of the early fifth century lay between the sees of Syrian Antioch and Egyptian Alexandria. One of Theodoret's aims was to show that Syria had produced individuals as pious as those of Egypt, about whom much had already been written. Urbainczyk studies the social background of these Syrian ascetics, describes the relationship between Theodoret's heroes and the Church community, and investigates how Theodoret presents his own personal relationship with the holy men.
This book is the first to examine Theodoret's role in his own work. Urbainczyk argues that the intimate details of Theodoret's life were not let slip accidentally but were inserted deliberately to buttress his own threatened position and to show how these independent men of God deferred to no one but himself.
Theodoret of Cyrrhus is an invaluable study for students of late antiquity, scholars of early Church history, early medieval historiographers and hagiographers.
Theresa Urbainczyk is College Lecturer in Classics, University College, Dublin.
AUTHOR BIOGRAPHY

Theresa Urbainczyk is College Lecturer in the Department of Classics, University College Dublin.

REVIEWS
". . . by situating one of his most famous writings in the cut and thrust of ecclesiastical politics, Dr. Urbainczyk has done us all great service by creating a more rounded, complex portrait of Theodoret the bishop and public man. Her conclusion also helpfully subverts any attempt to write a straightforward social history of Syrian asceticism using Theodoret's Lives. Instead, the manner in which Theodoret presents the ascetics and their rootedness in the Syrian countryside speaks to a process of literary ethnogenesis."
—Richard Lim, Biography: An Interdisciplinary Quarterly, Summer 2003
— Richard Lim, Biography: An Interdisciplinary Quarterly