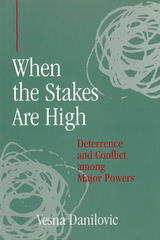 When the Stakes Are High is based on the premise that powers have continually played a decisive role in international conflicts. Consequently, one of the key questions concerns the conditions that are likely to trigger or abate dispute escalation into major power conflicts. In this book, Vesna Danilovic provides a rigorous theoretical and empirical analysis of these conditions.
Since the most precarious and common form of dispute between major powers arises over third nations, the author's primary focus is on so-called extended deterrence. In this type of deterrence, one side attempts to prevent another side from initiating or escalating conflict with a third nation. When the Stakes Are High addresses such questions as: When is extended deterrence likely to be effective? What happens if deterrence fails? In what circumstances is war likely to result from a deterrence failure? The author's main argument is that a major power's national interests, which shape the inherent credibility of threats and which are shaped by various regional stakes, set the limits to the relevance of other factors, which have received greater scholarly attention in the past. Strongly supported by the empirical findings, the arguments in this work draw important implications for conflict theory and deterrence policy in the post-Cold War era.
This book will appeal to the reader interested in international relations, in general, and in theories of international conflict, deterrence, causes of wars, great power behavior, and geopolitics, in particular.
Vesna Danilovic is Assistant Professor of Political Science, Texas A&M University.
TABLE OF CONTENTS
Contents
List of Figures
List of Tables
Preface
Part I
1. Introduction
2. Major Powers and Global Contenders
3. Deterrence and Conflict
Part II
4. Balance of Power and Power Shifts: Global Interests at Stake
5. Credibility and Geopolitics: Regional Interests at Stake
6. Resolve and Domestic Costs: Internal Interests at Stake
Part III
7. Predicting Major Power Conflicts: High Stakes or Costly Signals?
8. Theoretical and Policy Implications
Appendixes
A. Case Summaries and Sources
B. Conceptual and Operational Rules for Major Powers
C. Sources and Data for Colonial Possessions and Foreign Trade
D. Questions of Statistical Analysis and Discrete Choice Models
Notes
References
Index
REQUEST ACCESSIBLE FILE