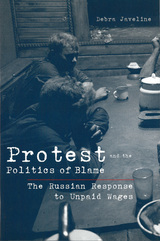 The wage arrears crisis has been one of the biggest problems facing contemporary Russia. At its peak, it has involved some $10 billion worth of unpaid wages and has affected approximately 70 percent of the workforce. Yet public protest in the country has been rather limited. The relative passivity of most Russians in the face of such desperate circumstances is a puzzle for students of both collective action and Russian politics. In Protest and the Politics of Blame, Debra Javeline shows that to understand the Russian public's reaction to wage delays, one must examine the ease or difficulty of attributing blame for the crisis.
Previous studies have tried to explain the Russian response to economic hardship by focusing on the economic, organizational, psychological, cultural, and other obstacles that prevent Russians from acting collectively. Challenging the conventional wisdom by testing these alternative explanations with data from an original nationwide survey, Javeline finds that many of the alternative explanations come up short. Instead, she focuses on the need to specify blame among the dizzying number of culprits and potential problem solvers in the crisis, including Russia's central authorities, local authorities, and enterprise managers. Javeline shows that understanding causal relationships drives human behavior and that specificity in blame attribution for a problem influences whether people address that problem through protest.
Debra Javeline is Assistant Professor of Political Science, Rice University.
TABLE OF CONTENTS
Contents
List of Figures
List of Tables
Acknowledgments
Introduction
Chapter 1. Why Blame Attribution Matters for Protest
Chapter 2. Wage Arrears in Russia: A Dif‹cult Issue
Chapter 3. Whom Russians Blame for Wage Arrears
Chapter 4. The Politics of Blame
Chapter 5. Alternative Explanations for the Russian Response to Wage Arrears
Chapter 6. Implications
Appendix A. How the Survey Was Conducted
Appendix B. Survey Questions
References
Index
REQUEST ACCESSIBLE FILE