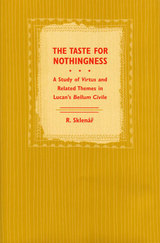 The Taste for Nothingness: A Study of Virtus and Related Themes in Lucan's Bellum Civile
by Robert John Sklenar
University of Michigan Press, 2003
Cloth: 978-0-472-11310-1
Lucan, the young and doomed epic poet of the Age of Nero, is represented by only one surviving work, the Bellum Civile, which takes as its theme the civil war that destroyed the Roman Republic. An epic unlike any other, it rejects point by point the aesthetics of Vergil's Aeneid and describes a society and a cosmos plunged into anarchy. Language was a casualty of this anarchy. All terminological certitudes were lost, including those that traditionally attach to the Latin word virtus: heroism on the battlefield, rectitude in the conduct of life.
The Taste for Nothingness traces Lucan's own analytical method by showing how virtus and related concepts operate--or rather, fail to operate--in Lucan's appropriations and distortions of the traditional epic-battle narrative; in the philosophical commitment of Cato the Younger; and in the personalities of the two antagonists, Pompey and Caesar. Much recent scholarship has reached a consensus that Lucan's literary method is mimetic, that his belief in a chaotic cosmos produces a poetics of chaos. While accepting many of the recent findings about Lucan's view of language and the universe, The Taste for Nothingness also allows an even bolder Lucan to emerge: a committed aesthete who regards art as the only realm in which order is possible.
Robert Sklenár is Visiting Assistant Professor of Classical Studies, Tulane University.
REQUEST ACCESSIBLE FILE