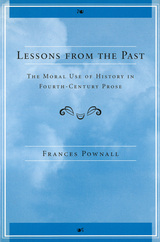 Because of the didactic nature of the historical genre, many scholars ancient and modern have seen connections between history and rhetoric. So far, discussion has centered on fifth-century authors -- Herodotus and Thucydides, along with the sophists and early philosophers. Pownall extends the focus of this discussion into an important period. By focusing on key intellectuals and historians of the fourth century (Plato and the major historians -- Xenophon, Ephorus, and Theopompus), she examines how these prose writers created an aristocratic version of the past as an alternative to the democratic version of the oratorical tradition.
Frances Pownall is Professor of History and Classics, University of Alberta.
TABLE OF CONTENTS
Contents
Introduction
Chapter One - The Intellectual Context
Chapter Two - The Menexenus: Plato's Critique of Political Rhetoric
Chapter Three - Xenophon's Hellenica
Chapter Four - Ephorus's History
Chapter Five - Theopompus's Philippica
Conclusion
Bibliography
Index
REQUEST ACCESSIBLE FILE