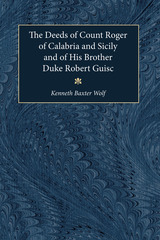 The Deeds of Count Roger of Calabria and Sicily and of His Brother Duke Robert Guisc
translated by Kenneth Baxter Wolf
University of Michigan Press, 2005
Cloth: 978-0-472-11459-7

Geoffrey Malaterra's Deeds of Count Roger is the most important extant account of the Norman conquest of Muslim Silicy (1061-91). This volume includes a translation of the Latin original as well as an introduction, notes, and maps.

The Deeds of Count Roger fills a gap in the primary literature pertaining to the earliest phase of Latin Christian expansion at the expense of Islam, since the Norman conquests in Sicily were more or less contemporary with the First Crusade and the beginnings of the Spanish Reconquista. The account also illustrates the complexity of medieval historical writing, with Malaterra on the one hand praising the Normans for their military achievements and on the other subtly criticising the "lust for domination" that inspired them.

Kenneth Baxter Wolf is Professor of History at Pomona College.