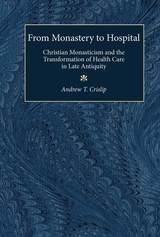 From Monastery to Hospital: Christian Monasticism and the Transformation of Health Care in Late Antiquity
by Andrew Crislip
University of Michigan Press, 2005
Cloth: 978-0-472-11474-0

From Monastery to Hospital traces the origin of the late Roman hospital to the earliest groups of Christian monastics. Often characterized as holy men and miracle-workers who transformed late antique spirituality, monks held an equally significant impact on the development of medicine in Late Antiquity. Andrew Crislip illuminates the innovative approaches to health care within the earliest monasteries that provided the model for the greatest medical achievement of Late Antiquity: the hospital.

From Monastery to Hospital draws on some of the most vibrant areas of scholarship of the ancient world, including asceticism, the study of the body, history of the family, and the history of medicine. The book will be of interest to scholars and students of early Christianity, Roman History, the history of medicine, and Catholic, Coptic, and Eastern Orthodox history and theology. It will also be of interest to the broader field of history of Christianity, especially with its connections to charitable traditions in the church through the modern period.

Andrew Crislip is Assistant Professor of Religion at the University of Hawaii.