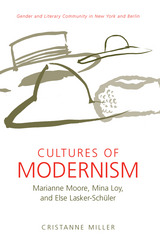 Cultures of Modernism explores how the structure and location of literary communities significantly influence who writes, what they write about, and their openness to formal experimentation. These influences particularly affect women writers. Author Cristanne Miller notes striking patterns of similarity in the concerns and lives of women living in geographically distant centers of modernist production. She looks at three significant poets---the American Marianne Moore, the British expatriate Mina Loy, and the German Else Lasker-Schüler---in the context of cultural, national, and local elements to argue that location significantly affected their performances of subjectivity, gender, race, and religion. The first book of its kind, Cultures of Modernism breaks new ground while it contributes to the ongoing reconception of the modernist period.

"A fascinating, provocative, and genuinely original study of a 'different' modernism in poetry---namely, the Modernism of women poets."
---Marjorie Perloff, Stanford University

"An important and ambitious work that makes major contributions to the fields of gender studies and modernist studies, and to the study of modernist poetry."
---Robin Schulze, Pennsylvania State University

"Offers a welcome corrective to the unreflective critical tendency . . . to make broad claims about the historical experiences and cultural conundrums of 'women,' and particularly 'women writers.' Miller offers tour-de-force comparative readings . . . threading together the world-historical with the personal, poetics with the political, and wielding the instruments of scansion as deftly as a surgeon."
---Modernism/modernity, The Official Journal of the Modernist Studies Association

Cristanne Miller is Edward H. Butler Professor of English and Chair of the English Department at the University of Buffalo, State University of New York.