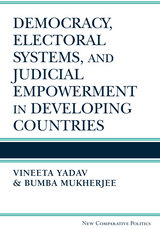 The power granted to the courts, both in a nation’s constitution and in practice, reveals much about the willingness of the legislative and executive branches to accept restraints on their own powers. For this reason, an independent judiciary is considered an indication of a nation’s level of democracy. Vineeta Yadav and Bumba Mukherjee use a data set covering 159 developing countries, along with comparative case studies of Brazil and Indonesia, to identify the political conditions under which de jure independence is established. They find that the willingness of political elites to grant the courts authority to review the actions of the other branches of government depends on the capacity of the legislature and expectations regarding the judiciary’s assertiveness.

Moving next to de facto independence, Yadav and Mukherjee bring together data from 103 democracies in the developing world, complemented by case studies of Brazil, India, and Indonesia. Honing in on the effects of electoral institutions, the authors find that, when faced with short time horizons, governments that operate in personal vote electoral systems are likely to increase de facto judicial independence whereas governments in party-centered systems are likely to reduce it.