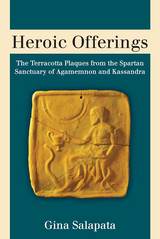 Heroic Offerings sheds light on the study of religion in Sparta, one of Greece’s most powerful city-states and the long-term rival of Athens. Sparta’s history is well known, but its archaeology has been much less satisfactorily explored. Through the comprehensive study of a distinctive class of terracotta votive offerings from a specific sanctuary, Gina Salapata explores both coroplastic art and regional religion. By integrating archaeological, historical, literary, and epigraphic sources, she provides important insights into the heroic cults of Lakonia and contributes to an understanding of the political and social functions of local ritual practice.

This volume focuses on a large group of decorated terracotta plaques, from the sixth to fourth centuries BCE. These molded plaques were discovered with other offerings in a sanctuary deposit excavated near Sparta more than fifty years ago, but they have remained unpublished until now. They number over 1,500 complete and fragmentary pieces. In technique, style, and iconography they form a homogeneous group unlike any other from mainland Greece. The large number of plaques and variety of types reveal a stable and vigorous coroplastic tradition in Lakonia during the late Archaic and Classical period.

Heroic Offerings will be of interest to students and scholars of Greek history, art, and archaeology, to those interested in ancient religious practice in the Mediterranean, and to all inspired by Athens’ chief political rival, Sparta.

This volume received financial support from the Archaeological Institute of America.