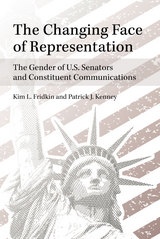 As the number of women in the U.S. Senate grows, so does the number of citizens represented by women senators. At the same time, gender remains a key factor in senators’ communications to constituents as well as in news media portrayals of senators. Focusing on 32 male and female senators during the 2006 congressional election year, Kim L. Fridkin and Patrick J. Kenney examine in detail senators’ official websites, several thousand press releases and local news stories, and surveys of 18,000 citizens to discern constituents’ attitudes about their senators.

The authors conclude that gender role expectations and stereotypes do indeed constrain representational and campaign messages and influence news coverage of both candidates and elected senators. Further, while citizens appear to be less influenced by entrenched stereotypes, they pay more attention to female senators’ messages and become more knowledgeable about them, in comparison to male senators.
AUTHOR BIOGRAPHY
Kim L. Fridkin is Professor of Political Science at Arizona State University.

Patrick J. Kenney is the Dean of Social Sciences in the College of Liberal Arts and Sciences, Associate Vice President of Research, and Director of The Institute for Social Science Research at Arizona State University.