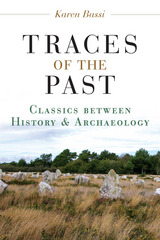 What are we doing when we walk into an archaeological museum or onto an archaeological site? What do the objects and features we encounter in these unique places mean and, more specifically, how do they convey to us something about the beliefs and activities of formerly living humans? In short, how do visible remains and ruins in the present give meaning to the human past? Karen Bassi addresses these questions through detailed close readings of canonical works spanning the archaic to the classical periods of ancient Greek culture, showing how the past is constituted in descriptions of what narrators and characters see in their present context. She introduces the term protoarchaeological to refer to narratives that navigate the gap between linguistic representation and empirical observation—between words and things—in accessing and giving meaning to the past. Such narratives invite readers to view the past as a receding visual field and, in the process, to cross the disciplinary boundaries that divide literature, history, and archaeology.

Aimed at classicists, literary scholars, ancient historians, cultural historians, and archaeological theorists, the book combines three areas of research: time as a feature of narrative structure in literary theory; the concept of “the past itself” in the philosophy of history; and the ontological status of material objects in archaeological theory. Each of five central chapters explores how specific protoarchaeological narratives—from the fate of Zeus’ stone in Hesiod’s Theogony to the contest between words and objects in Aristophanes’ Frogs—both expose and attempt to bridge this gap. Throughout, the book serves as a response to Herodotus’ task in writing the Histories, namely, to ensure that “the past deeds of men do not fade with time.”

AUTHOR BIOGRAPHY
Karen Bassi is Professor of Literature and Classics at the University of California, Santa Cruz.

TABLE OF CONTENTS
Contents
Acknowledgments
Introduction: Seeing the Past
1. The Landscape of the Past in Hesiod’s Theogony
2. The Hypothetical Past and the Achaean Wall in the Iliad
3. Blinded by Time: The Past “As If ” in the Odyssey
4. “Up to My Time”: The Fading of the Past in Herodotus’ Histories
5. Tragedy Vanishes: Reading the Past in Aristophanes’ Frogs
Epilogue: Reading the Past
Bibliography
Index Locorum
Greek Terms
General Index
REQUEST ACCESSIBLE FILE