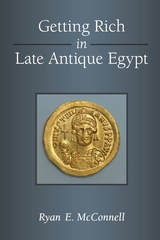 Papyrologists and historians have taken a lively interest in the Apion family (fifth through seventh centuries), who rose from local prominence in rural Middle Egypt to become one of the wealthiest and most powerful families in the Eastern Roman Empire. The focus of most scholarly debate has been whether the Apion estate—and estates like it—aimed for a marketable surplus or for self-sufficiency. Getting Rich in Late Antique Egypt shifts the discussion to precisely how the Apions’ wealth was generated and what role their Egyptian estate played in that growth by engaging directly with broader questions of the relationship between public and private economic actors in Late Antiquity, rational management in ancient economies, the size of estates in Byzantine Egypt, and the role of rural estates in the Byzantine economy.

Ryan E. McConnell connects the family’s rise in wealth and status to its role in tax collection on behalf of the Byzantine state, rather than a reliance on productive surpluses. Close analysis of low- and high-level accounts from the Apion estate, as well as documentation from comparable Roman and Byzantine Egyptian estates, corroborate this conclusion. Additionally, McConnell offers a third way into the ongoing debate over whether the Apions’ relationship with the state was antagonistic or cooperative, concluding that the relationship was that of parties in a negotiation, with each side seeking to maximize its own benefit. The application of modern economic concepts—as well as comparisons to the economies of Athens, Rome, Ptolemaic Egypt, and Early Modern France—further illuminate the structure and function of the estate in Late Antique Egypt.

Getting Rich in Late Antique Egypt will be a valuable resource for philologists, archaeologists, papyrologists, and scholars of Late Antiquity. It will also interest scholars of agricultural, social, and economic history.