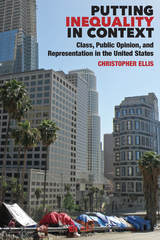 Rising income inequality is highlighted as one of the largest challenges facing the United States, affecting civic participation and political representation. Although the wealthy often can and do exert more political influence, this is not always the case. To fix political inequality, it is important to understand exactly how class divisions manifest themselves in political outcomes, and what factors serve to enhance, or depress, inequalities in political voice.

Christopher Ellis argues citizens’—and legislators’—views of class politics are driven by lived experience in particular communities. While some experience is formally political, on an informal basis citizens learn a great deal about their position in the broader socioeconomic spectrum and the social norms governing how class intersects with day-to-day life. These factors are important for policymakers, since most legislators do not represent “the public” at large, but specific constituencies.

Focusing on U.S. congressional districts as the contextual unit of interest, Ellis argues individuals’ political behavior cannot be separated from their environment, and shows how income’s role in political processes is affected by the contexts in which citizens and legislators interact. Political inequality exists in the aggregate, but it does not exist everywhere. It is, rather, a function of specific arrangements that depress the political influence of the poor. Identifying and understanding these factors is a crucial step in thinking about what reforms might be especially helpful in enhancing equality of political voice.

AUTHOR BIOGRAPHY
Christopher Ellis is Associate Professor of Political Science at Bucknell University and Director of the Bucknell Institute of Public Policy.