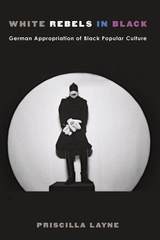 Analyzing literary texts and films, White Rebels in Black shows how German authors have since the 1950s appropriated black popular culture, particularly music, to distance themselves from the legacy of Nazi Germany, authoritarianism, and racism, and how such appropriation changes over time. Priscilla Layne offers a critique of how blackness came to symbolize a positive escape from the hegemonic masculinity of postwar Germany, and how black identities have been represented as separate from, and in opposition to, German identity, foreclosing the possibility of being both black and German. Citing four autobiographies published by black German authors Hans Jürgen Massaquo, Theodor Michael, Günter Kaufmann, and Charly Graf, Layne considers how black German men have related to hegemonic masculinity since Nazi Germany, and concludes with a discussion on the work of black German poet, Philipp Khabo Köpsell.
AUTHOR BIOGRAPHY
Priscilla Layne is Assistant Professor of German and Adjunct Assistant Professor of African and African American Diaspora Studies at the University of North Carolina at Chapel Hill.
REVIEWS
"White Rebels in Black is a must-read for scholars interested in Black German studies and in questions of diversity and social justice. It can serve as an appeal to Germanists studying any text to recognize and challenge patterns of othering and cultural appropriation. The diversity of texts within this book demonstrates that these are common tropes and that it is our task as scholars to expose and challenge the underlying stereotypes. Th e theme of masculinity is carried throughout and offers convincing theoretical engagement with an oft en- overlooked aspect of intersectionality. All chapters can also serve as valuable resources for undergraduate and graduate classes in which the specific texts are discussed."
—Feminist German Studies
— Nicole Coleman, Feminist German Studies