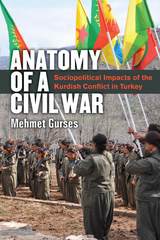 Anatomy of a Civil War demonstrates the destructive nature of war, ranging from the physical to the psychosocial, as well as war’s detrimental effects on the environment. Despite such horrific aspects, evidence suggests that civil war is likely to generate multilayered outcomes. To examine the transformative aspects of civil war, Mehmet Gurses draws on an original survey conducted in Turkey, where a Kurdish armed group, the Kurdistan Workers’ Party (PKK), has been waging an intermittent insurgency for Kurdish self-rule since 1984. Findings from a probability sample of 2,100 individuals randomly selected from three major Kurdish-populated provinces in the eastern part of Turkey, coupled with insights from face-to-face in-depth interviews with dozens of individuals affected by violence, provide evidence for the multifaceted nature of exposure to violence during civil war. Just as the destructive nature of war manifests itself in various forms and shapes, wartime experiences can engender positive attitudes toward women, create a culture of political activism, and develop secular values at the individual level. In addition, wartime experiences seem to robustly predict greater support for political activism. Nonetheless, changes in gender relations and the rise of a secular political culture appear to be primarily shaped by wartime experiences interacting with insurgent ideology.
AUTHOR BIOGRAPHY
Mehmet Gurses is Associate Professor of Political Science at Florida Atlantic University.
TABLE OF CONTENTS
Contents
Preface
Introduction
Part I
One. The Dark Side of War
Part II
Two. Toward an Integrated Theory of Civil War and Change
Part III
Three. War and Women
Four. War and Political Culture
Five. War and Religion
Part IV
Six. War and Peace
Seven. Conclusion
Notes
Bibliography
Index
REQUEST ACCESSIBLE FILE