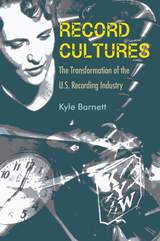 Record Cultures tells the story of how early U.S. commercial recording companies captured American musical culture in a key period in both music and media history. Amid dramatic technological and cultural changes of the 1920s and 1930s, small recording companies in the United States began to explore the genres that would later be known as jazz, blues, and country. Smaller record labels, many based in rural or out of the way Midwestern and Southern towns, were willing to take risks on the country’s regional vernacular music as a way to compete with more established recording labels. Recording companies’ relationship with radio grew closer as both industries were on the rise, propelled by new technologies. Radio, which had become immensely popular, began broadcasting more recorded music in place of live performances, and this created profitable symbiosis. With the advent of the talkies, the film industry completed the media trifecta. The novelty of recorded sound was replacing film accompanists, and the popularity of movie musicals solidified film’s connections with the radio and recording industries. By the early 1930s, the recording industry had gone from being part of the largely autonomous phonograph industry to being major media industry of its own, albeit deeply tied to—and, in some cases, owned by—the radio and film industries. The triangular relationships between these media industries marked the first major entertainment and media conglomerates in U.S. history.

Through an interdisciplinary and intermedial approach to recording industry history, Record Cultures creates new connections between different strands of media research. It will be of interest to scholars of popular music, media studies, sound studies, American culture, and the history of film, television, and radio.
AUTHOR BIOGRAPHY
Kyle Barnett is Associate Professor of Media Studies in the Department of Communication at Bellarmine University.
REVIEWS
Winner of the 2021 ARSC Award for Excellence in Best Historical Research on Record Labels or General Recording Topics
— Association for Recorded Sound Collections (ARSC) Award

"Record Cultures: The Transformation of the U.S. Recording Industry fills an important gap in scholarship that has been vacant for far too long, and it is an excellent offering that hopefully will spur more conversation about the role of recorded sound in media history."
-Journal of Radio & Audio Media
— Len O'Kelly, Journal of Radio & Audio Media

TABLE OF CONTENTS
Contents
Introduction: Phonograph Boom: The Expansion of the U.S. Recording Industry
One: “What Do You Think about Jazz?”: Niche Genres and Recording Culture
Two: “Are These Not Great Artists?”: Race Records and Genre Discourse
Three: “Uninvited and Unannounced”: Old-Time Music and Radio
Four: “On with the Dance”: Media Industries’ Jazz-Age Convergence
Five: “The Trademark Dog’s Stubby Tail”: Depression and Resurgence
Notes
Bibliography
Index
REQUEST ACCESSIBLE FILE