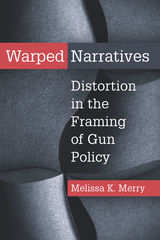 The politics of gun policy in the United States are dramatic. Against the backdrop of daily gun violence—which claims more than 33,000 lives per year—gun control groups push for stronger regulations, while gun rights groups resist infringements upon their Second Amendment rights. To illuminate the dynamics of this polarized debate, Warped Narratives examines how and why interest groups frame the gun violence problem in particular ways, exploring the implication of groups’ framing choices for policymaking and politics. Melissa K. Merry argues that the gun policy arena is warped, and that both gun control and gun rights organizations contribute to the distortion of the issue by focusing on atypical characters and settings in their policy narratives. Gun control groups emphasize white victims, child victims, and mass shootings in suburban locales, while gun rights groups focus on self-defense shootings, highlighting threats to “law-abiding” gun owners. In reality, most gun deaths are the result of suicide. Homicides occur disproportionately in urban areas, mainly affecting racial minorities. While warping makes political sense in the short term, it may lead to negative, long-term consequences, including constraints on groups’ ability to build broad-based coalitions and to reduce prospects for compromise. To demonstrate warping, Merry analyzes nearly 67,000 communications by 15 national gun policy groups between 2000 and 2017 collected from blogs, emails, Facebook posts, and press releases. This book is the first to systematically assess the role of race in gun policy groups’ framing and offers the most comprehensive examination to date of interest groups’ presentation of this issue.

Melissa K. Merry is Associate Professor of Political Science at the University of Louisville.