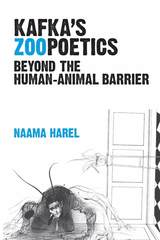 Nonhuman figures are ubiquitous in the work of Franz Kafka, from his early stories down to his very last one. Despite their prominence throughout his oeuvre, Kafka’s animal representations have been considered first and foremost as mere allegories of intrahuman matters. In recent years, the allegorization of Kafka’s animals has been poetically dismissed by Kafka’s commentators and politically rejected by posthumanist scholars. Such critique, however, has yet to inspire either an overarching or an interdiscursive account. This book aims to fill this lacuna. Positing animal stories as a distinct and significant corpus within Kafka’s entire poetics, and closely examining them in dialogue with both literary and posthumanist analysis, Kafka’s Zoopoetics critically revisits animality, interspecies relations, and the very human-animal contradistinction in the writings of Franz Kafka.

Kafka’s animals typically stand at the threshold between humanity and animality, fusing together human and nonhuman features. Among his liminal creatures we find a human transformed into vermin (in “The Metamorphosis”), an ape turned into a human being (in “A Report to an Academy”), talking jackals (in “Jackals and Arabs”), a philosophical dog (in “Researches of a Dog”), a contemplative mole-like creature (in “The Burrow”), and indiscernible beings (in “Josefine, the Singer or the Mouse People”). Depicting species boundaries as mutable and obscure, Kafka creates a fluid human-animal space, which can be described as “humanimal.” The constitution of a humanimal space radically undermines the stark barrier between human and other animals, dictated by the anthropocentric paradigm. Through denying animalistic elements in humans, and disavowing the agency of nonhuman animals, excluding them from social life, and neutralizing compassion for them, this barrier has been designed to regularize both humanity and animality. The contextualization of Kafka's animals within posthumanist theory engenders a post-anthropocentric arena, which is simultaneously both imagined and very real.

Naama Harel is a core faculty member at Columbia University's Institute for Israel and Jewish Studies and the Department of Middle Eastern, South Asian, and African Studies (MESAAS), and the Co-Chair of Columbia University Seminar on Human-Animal Studies