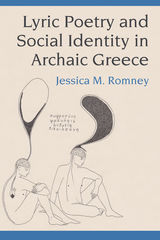 Lyric Poetry and Social Identity in Archaic Greece examines how Greek men presented themselves and their social groups to one another. The author examines identity rhetoric in sympotic lyric: how Greek poets constructed images of self for their groups, focusing in turn on the construction of identity in martial-themed poetry, the protection of group identities in the face of political exile, and the negotiation between individual and group as seen in political lyric. By conducting a close reading of six poems and then a broad survey of martial lyric, exile poetry, political lyric, and sympotic lyric as a whole, Jessica Romney demonstrates that sympotic lyric focuses on the same basic behaviors and values to construct social identities regardless of the content or subgenre of the poems in question. The volume also argues that the performance of identity depends on the context as well as the material of performance. Furthermore, the book demonstrates that sympotic lyric overwhelmingly prefers to use identity rhetoric that insists on the inherent sameness of group members.

All non-English text and quotes are translated, with the original languages given alongside the translation or in the endnotes.
AUTHOR BIOGRAPHY
Jessica M. Romney is Assistant Professor of Classics in the Department of Humanities at MacEwan University, Alberta.
TABLE OF CONTENTS
Contents
Conventions
Introduction: Language and Identity
Chapter 1. The Rhetoric and Discourse of Groupness
Chapter 2. Constructing Group Identity: Tyrtaeus and Martial Lyric
Chapter 3. Threats to Social Identity: Alcaeus on Exile and Betrayal
Chapter 4. The Group and the Individual: Solon and Political Lyric
Conclusion: Identity through Poetry
Notes
Bibliography
Poem Index with First Lines
Subject Index
REQUEST ACCESSIBLE FILE