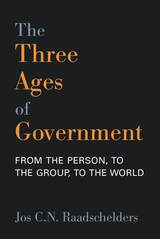 It is only in the last 250 years that ordinary people (in some parts of the world) have become citizens rather than subjects. This change happened in a very short period, between 1780 and 1820, a result of the foundations of democracy laid in the age of revolutions. A century later local governments embraced this shift due to rapid industrialization, urbanization, and population growth. During the twentieth century, all democratic governments began to perform a range of tasks, functions, and services that had no historical precedent. In the thirty years following the Second World War, Western democracies created welfare states that, for the first time in history, significantly reduced the gap between the wealthy and everyone else. Many of the reforms of that postwar period have been since rolled back because of the belief that government should be more like a business. Jos C.N. Raadschelders provides the information that all citizens should have about their connections to government, why there is a government, what it does, how it does it, and why we can no longer do without it. The Three Ages of Government rises above stereotypical thinking to show the centrality of government in human life.
AUTHOR BIOGRAPHY
Jos C.N. Raadschelders is Professor, Associate Dean for Faculty, and Faculty Director of Professional Development Programs at The Ohio State University.
REVIEWS
“A master of history and a maestro of words, Raadschelders tackles a question that is seemingly pedantic, but actually profound: ‘What is government?’ His exploration of the ever-evolving role of government in society informs our understanding of the past and inspires our hopes for the future.”
—Tina Nabatchi, Syracuse University
— Tina Nabatchi, Syracuse University

“Government needs to make a difference to society by being significantly part of solutions to societal problems. If not, government becomes part of the problem. Raadschelders describes convincingly how government changes its nature to remain part of the solution. This book is indispensable to understand how public administration is part of that changing solution.”
—Geert Bouckaert, KU Leuven Public Governance Institute
— Geert Bouckaert, KU Leuven Public Governance Institute

TABLE OF CONTENTS
Contents
Acknowledgments
Introduction: What Is Government?
One. Understanding Government in Society: The Past Fifty Years
1. Government Today
2. What Positions Can State and Government Occupy in Society?
3. What Roles Can Government Play in Society? Government’s Political Revolution
4. Trends in the Role of Government in Society
5. How the Study of Public Administration Contributes to Understanding Government
6. Why Study This?
Two. Government in Society: The Conceptual and Historical Context for Understanding Government
1. Opening Salvo: On the Torture of Holistic Scholarship
2. Government as Artifice of Bounded Rationality: Simon and Vico
3. Social Ontology for Understanding Institutional Arrangements
4. Hierarchies of Knowledge: From Simple to Complex Phenomena
5. Government as Function of Instinct, Community, and Society
6. Institutional Changes and the Triple Whammy
Changes at the Constitutional Level
Changes at the Collective Level
Changes at the Operational Level
Enter the Triple Whammy: Industrialization, Urbanization, and Rapid Population Growth
7. The Stage Is Set for the Remainder of This Book
Three. Instinct and Intent: Origins and Elements of Human Governing Behaviors
1. The Nature-Nurture Issue: From Dichotomy to Balanced Complex
2. Sociality among the Great Apes and Humans: Similarities and Differences
Similarities
Differences
3. Physical and Social Features of the Hominin Tribe
4. Human Instinct and Intent
5. How We Differ from Primates: Governing among and of Hunter-Gatherers
6. Conflicting Impulses Underlying Governing Arrangements
7. Concluding Comments: Relevance to Understanding What Government Is
Four. Tribal Community: Governing Humans in Ever Larger, Sedentary Groups
1. The Growth, Dispersion, and Concentration of the Human Species
2. The Agricultural Revolution: Fraud or Inevitable?
3. Small and Large-Scale Governing Arrangements: Four Main Phases of Socioeconomic Development, Three Structuring Constants, and Two Governing Revolutions
4. The Rise and Fall of Governing Arrangements: Self-Governing Capacity as the Default
5. The Political-Administrative Revolution since the 1780s: A Very Brief Recap
6. The Triple Whammy Plus High-Speed Communication Technology
7. From Government as Instrument to Government as Container: The Role and Position of the Individual
Five. Citizen and Government in a Global Society: Globalization and the Deep Current of Rationalization
1. What Is Globalization? What Is a Global Society?
2. The Impact of Globalization on People as Citizens and as Public Officeholders
3. The Impact of Globalization on the Structure and Functioning of Government
4. The Impact of Globalization on the Role and Position of Government
5. Understanding Globalization: The Deep Current of Rationalization and Its Manifestation(s)
6. How Can Citizens and Governments Deal with Globalization and the Perversions of Rationalization?
Six. Governing as Process: Negotiable Authority and Multisource Decision-Making
1. The Role and Position of Career Civil Servants in Democratic Political Systems
2. The Nature of Public Authority
3. Negotiable Authority as Key to Understanding What Democratic Government Is Today
4. The Nature of Public Decision-Making
5. Multisource Decision-Making as Standard in Democratic Government
6. The Governing We Can Take for Granted
7. Citizens and Government Have Come a Long Way in a Very Short Time
Seven. Democracy: Thriving by Self-Restraint, Vulnerable to Human Instinct, Tribal Community, and Global Society
1. The Position and Role of Government in Society
2. The Influence of Human Instinct
3. The Influence of Tribal Community
4. The Influence of Global Society
5. Democracy as Ideal and as Vulnerable: Challenges from Human Behavior
Democracy as Ideal Political System
Declining Trust in Government
Rent-Seeking Behavior by Private Actors: Business Principles in the Public Realm
Personality Politics and Populism: The Enduring Power of Emotions
Na-Na-Na-Na-Boo-Boo Politics: The Price of Polarization and Partisanship
The Need for Continuous Civics Education
6. Democracy and Bureaucracy: The Delicate Interplay of Fairness and Efficiency
7. Democracy, Self-Restraint, and True Guardians
Notes
References
Name Index
Subject Index
REQUEST ACCESSIBLE FILE