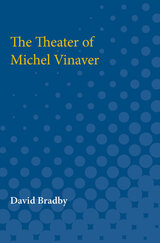 BUY
The Theater of Michel Vinaver
by David 0 Bradby
University of Michigan Press, 1993
Paper: 978-0-472-75044-3
Michel Vinaver is considered the outstanding French dramatist of his generation. No other contemporary playwright commands such respect in his own country. Vinaver is the first playwright since the great days of Sartre and Beckett, Ionesco and Genet, to see his complete works published during his lifetime. Since 1955, Vinaver has published sixteen major plays, which have been praised by major critics from Camus to Barthes. Distinguished British scholar David Bradby systematically explores the vital components of Vinaver's achievement, examining his dramatic theory, criticism, and plays as well as the production and reception of his dramatic works. The Theater of Michel Vinaver provides the first English-language reference work for those who wish to study Vinaver's drama and the general development of the French theater over the past four decades.