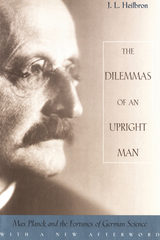 In this moving and eloquent portrait, Heilbron describes how the founder of quantum theory rose to the pinnacle of German science. He shows how Planck suffered morally and intellectually as his lifelong habit of service to his country and to physics was confronted by the realities of World War I and the brutalities of the Third Reich.
TABLE OF CONTENTS
Cover
Title
Copyright
Contents
Preface
Abbreviations
Chapter 1. Establishing the World Picture
Planck’s Formula
Reluctant Atomist
Enthusiastic Relativist
Concerned Pedagogue
Against Mach
In the Academy
In the War
Against Fate
Chapter 3. Doctor of Science
Of the Body
International Relations
Anti-Antirelativity
Of the Soul
Chapter 4. In Shipwreck
As Captain
As Chaplain
As Salvager
By Their Fruits Ye Shall Know Them
Afterword, 2000
Bibliography
Index