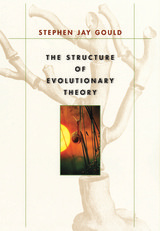 The world’s most revered and eloquent interpreter of evolutionary ideas offers here a work of explanatory force unprecedented in our time—a landmark publication, both for its historical sweep and for its scientific vision.

With characteristic attention to detail, Stephen Jay Gould first describes the content and discusses the history and origins of the three core commitments of classical Darwinism: that natural selection works on organisms, not genes or species; that it is almost exclusively the mechanism of adaptive evolutionary change; and that these changes are incremental, not drastic. Next, he examines the three critiques that currently challenge this classic Darwinian edifice: that selection operates on multiple levels, from the gene to the group; that evolution proceeds by a variety of mechanisms, not just natural selection; and that causes operating at broader scales, including catastrophes, have figured prominently in the course of evolution.

Then, in a stunning tour de force that will likely stimulate discussion and debate for decades, Gould proposes his own system for integrating these classical commitments and contemporary critiques into a new structure of evolutionary thought.

In 2001 the Library of Congress named Stephen Jay Gould one of America’s eighty-three Living Legends—people who embody the “quintessentially American ideal of individual creativity, conviction, dedication, and exuberance.” Each of these qualities finds full expression in this peerless work, the likes of which the scientific world has not seen—and may not see again—for well over a century.
TABLE OF CONTENTS