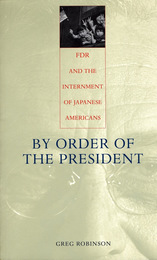 On February 19, 1942, following the Japanese bombing of Pearl Harbor, President Franklin Delano Roosevelt signed a fateful order that allowed for the summary removal of Japanese aliens and American citizens of Japanese descent from their West Coast homes and their incarceration under guard in camps. Amid the numerous histories and memoirs devoted to this shameful event, FDR's contributions have been seen as negligible. Now, using Roosevelt's own writings, his advisors' letters and diaries, and internal government documents, Greg Robinson reveals the president's central role in making and implementing the internment and examines not only what the president did but why.
TABLE OF CONTENTS
CONTENTS
Introduction
1. A Racial Fear Emerges
2. War Abroad, Suspicion at Home
3. FDR’s Decision to Intern
4. Implementing an Undemocratic Policy
5. Covering a Retreat
6. Equal Justice Delayed
7. The President of All the People?
Note on Terminology
Abbreviations
Notes
Acknowledgments
Index