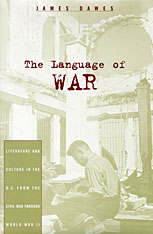 The Language of War examines the relationship between language and violence, focusing on American literature from the Civil War, World War I, and World War II. James Dawes proceeds by developing two primary questions: How does the strategic violence of war affect literary, legal, and philosophical representations? And, in turn, how do such representations affect the reception and initiation of violence itself? Authors and texts of central importance in this far-reaching study range from Louisa May Alcott and William James to William Faulkner, the Geneva Conventions, and contemporary American organizational sociology and language theory.

The consensus approach in literary studies over the past twenty years has been to treat language as an extension of violence. The idea that there might be an inverse relation between language and violence, says Dawes, has all too rarely influenced the dominant voices in literary studies today. This is an ambitious project that not only makes a serious contribution to American literary history, but also challenges some of the leading theoretical assumptions of our day.
TABLE OF CONTENTS