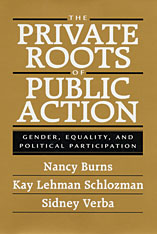 Why, after several generations of suffrage and a revival of the women's movement in the late 1960s, do women continue to be less politically active than men? Why are they less likely to seek public office or join political organizations? The Private Roots of Public Action is the most comprehensive study of this puzzle of unequal participation.

The authors develop new methods to trace gender differences in political activity to the nonpolitical institutions of everyday life--the family, school, workplace, nonpolitical voluntary association, and church. Different experiences with these institutions produce differences in the resources, skills, and political orientations that facilitate participation--with a cumulative advantage for men. In addition, part of the solution to the puzzle of unequal participation lies in politics itself: where women hold visible public office, women citizens are more politically interested and active. The model that explains gender differences in participation is sufficiently general to apply to participatory disparities among other groups--among the young, the middle-aged, and the elderly or among Latinos, African-Americans and Anglo-Whites.

1. Introduction: Citizenship and Unequal Participation
2. Studying Gender and Participation: A Brief Discourse on Method
3. Civic Activity: Political and Non-Political
4. The Political Worlds of Men and Women
5. The Legacy of Home and School
6. Domestic Tranquility: The Beliefs of Wives and Husbands
7. Domestic Hierarchy: The Household as a Social System
8. The Workplace Roots of Political Activity
9. The Realm of Voluntarism: Non-Political Associations and Religious Institutions
10. Gender, Institutions, and Political Participation
11. Gender, Race or Ethnicity, and Participation
12. Family Life and Political Life
13. What If Politics Weren't a Man's Game?
14. Conclusion: The Private Roots of Public Action

Reviews of this book:
The Private Roots of Public Action begins with common explanations for the gender difference in participation, from domestic demands on women's time and psychic space through the effects of the patriarchal family, socioeconomic hierarchies, and political socialization...The results of [this] novel analysis are complex and interesting...The authors extend their model to examine the relationship between class, race or ethnicity, and political participation. This unique and accessible volume will be influential in the fields of political socialization and gender and politics. Strongly recommended.
--B. E. Marston, Choice

The Private Roots of Public Action is the most comprehensive examination of the similarities and differences in the political activity of women and men. The range of inquiry is enormous. Burns, Schlozman and Verba delve not only into political activity but also into the processes in the family, in the workplace, in places of worship, and in voluntary associations that promote and inhibit political involvement. This book goes beyond the literature in connecting to an enormous range of scholarship in political science, economics, and sociology. This is a fine piece of work.
--John Mark Hansen, University of Chicago

The Private Roots of Public Action is a very important book. It pushes research on gender and participation to a whole new level, and reshapes the agenda as far as our thinking and our research about the connections among family life, the workplace, institutions of civil society, and political and governmental institutions. The authors demonstrate the importance of understanding political participation within a larger context in a way that does justice to the complexity of people's lives.
--Kristi Anderson, Syracuse University

The Private Roots of Public Action is an important contribution to the literature on both political participation and gender politics. Because of its database, its tie-in to the most current work on political participation, and its comprehension of important current questions about gender politics, this book provides a new benchmark for work in this field. In particular, the Civic Voluntarism model developed by Verba, Schlozman, and Brady, and the consideration of how gender difference and inequality might feed into that model, is a unique contribution. This accessible book will be welcomed by gender politics scholars and will have an impact on the field of political participation.
--Virginia Sapiro, University of Wisconsin-Madison
TABLE OF CONTENTS
Contents
Acknowledgments
1. Introduction: Citizenship and Unequal Participation
2. Studying Gender and Participation
3. Civic Activity
4. The Political Worlds of Men and Women
5. The Legacy of Home and School
6. Domestic Tranquility
7. Domestic Hierarchy
8. The Workplace Roots of Political Activity
9. The Realm of Voluntarism
10. Gender, Institutions, and Political Participation
11. Gender, Race or Ethnicity, and Participation
12. Family Life and Political Life
13. What If Politics Weren’t a Man’s Game?
14. Conclusion: The Private Roots of Public Action
Appendixes
A. Numbers of Cases
B. Ranges of Variables
C. Supplementary Tables
D. Explanation of Outcomes Analysis
Index