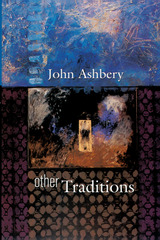 One of the greatest living poets in English here explores the work of six writers he often finds himself reading "in order to get started" when writing. Among those whom Ashbery reads at such times are John Clare, Thomas Lovell Beddoes, Raymond Roussel, John Wheelwright, Laura Riding, and David Schubert. Less familiar than some, under Ashbery's scrutiny these poets emerge as the powerful but private and somewhat wild voices whose eccentricity has kept them from the mainstream--and whose vision merits Ashbery's efforts, and our own, to read them well.
TABLE OF CONTENTS
Cover
Title
Copyright
Preface
Contents
Chapter I. “Grey Openings Where the Light Looks Through”
Chapter II. The Poetry of Thomas Lovell Beddoes
Chapter III. The Bachelor Machines of Raymond Roussel
Chapter IV. “Why Must You Know?”: The Poetry of John Wheelwright
Chapter V. “The Unthronged Oracle”
Chapter VI. “This Is the Book That No One Knows”
Notes
Index